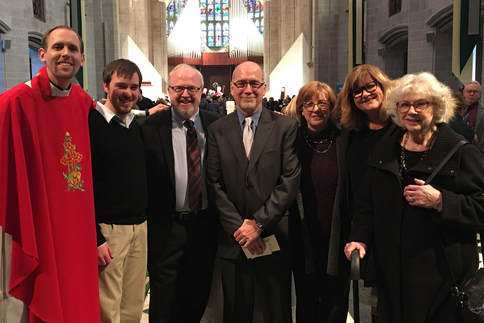 My husband and I attended ALPHA classes in the Fall of 2014. ALPHA greatly helped me to understand my Catholic Christian faith. I ended my ALPHA classes feeling a great joy and peace I had never experienced before. Our facilitator mentioned we would have a celebration dinner for our last meeting. We invited two couples to join us, one being my sister, Leslie, and my brother-in-law, Bill.

We all enjoyed our celebration dinner and my husband took the microphone to describe his heart felt experience at ALPHA. A few weeks after our dinner, we were so happy to see Leslie and Bill returning to Mass. A couple of months later, on Easter Sunday, Bill gave us a wonderful gift. He spoke to our extended family about what an amazing Lenten season he had had. He attributed part of his developing faith to attending the ALPHA dinner and witnessing us being involved and proud of our faith.

As often as possible, Bill started to attend daily Mass at the Shrine of the Little Flower. He went to Adoration regularly. He joined the Evangelization committee at the Shrine and participated in other classes they offered. Father Patrick Gonyeau became one of his spiritual directors and a friend and on November 22, 2015, Bill was confirmed at the Cathedral of the Most Blessed Sacrament.  My husband, Mike, was his sponsor.

Bill and Leslie relocated to the Farmington hills area in 2016. Bill loved attending Mass at the Monastery of the Blessed Sacrament. Sadly, in January of 2017, Bill was diagnosed with pancreatic cancer. It was a difficult illness and he needed the support of his Catholic faith. When he found out his illness was terminal, he said to my husband, “Hey Mike, I am going home.” He went home to be with the Lord on May 10, 2017.

Who knew what was going to happen at that ALPHA celebration dinner back in December 2014? My faith tells me that God did. I hope you will consider attending ALPHA classes. Bill and I truly found our Catholic Christian faith with the help of ALPHA. I believe the ALPHA experience does help to change lives.

Peace be with you, Bill.

Here is the experience of Mike, who attended Alpha in 2016.

For those who might be interested in the Alpha classes, I attended last year (in the fall of 2017) and highly recommend the course.  It reawakened my interest in Catholicism and prompted me to take more classes about Bible history.

Truthfully, I didn't know what to expect before I attended and thought that I might just go to one class and walk away, but it was far more interesting than I originally thought and I am glad that I participated.

The video lectures were well worth the time and led to lively discussions with our group after each showing.  Sometimes they answered questions, other times they raised more questions which we would talk about after the video in our group.  This is definitely a course for adults, not children.

We had a nice mix of young and old, men and women in our group, including people that were knowledgeable about Catholicism and those that knew almost nothing about it.  For someone who was skeptical at first, I'll say that I finished thinking it was time well spent. 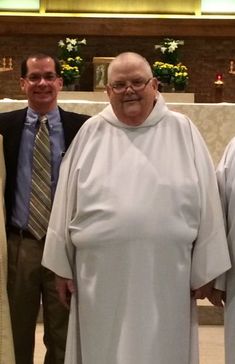 Here is the experience of R.V.H., an Alpha guest that attended the celebration dinner on the final evening of 2015.

My Journey to Christ and His Church
by R.V.H.

​A little history... Bear with me. I lived on a small dairy farm in upstate New York for my first twelve years. My parents professed to be protestant, however we never went to church and I was never baptized.

My wife, Helen, was a lifelong Catholic, but not practicing. At one time, she was a member of the La Salette parish. We would go to Mass on special occasions and holidays.
My Journey Begins. Helen had a stroke at the end of March 2010. The doctors told me that the type of stroke Helen had was fatal over 80% of the time. I began to pray for her. She beat the odds and recovered from the stroke and a subsequent broken hip. She was partially paralyzed and in constant pain.

November 8th, 2015 God took Helen home to her reward. Shortly after Helen’s burial, a tiny thought entered my presence to go to a Mass at La Salette to ask God for help with my grief. I tried to ignore this thought but it just became more powerful. I relented and went to a Mass. Did not notice any change in my grief.

After “Come Encounter Christ” the quiet little voice became much louder. I needed to know more. I went to the La Salette web site and the Alpha page. After reviewing the web page, I decided that I would like to attend Alpha. I called the number and talked to Pat. Pat informed me that Alpha was completed until the following year. except for the closing session, to which she invited me.

I went to the closing session. During the session, my little “voice” began screaming at me to find out how to go about joining the Church. After the session, I stopped by the table where Pat was to thank her for inviting me and find out when the next Alpha program might be available and if she could tell me how I might go about joining the Church. Just as I was asking this question Deacon Brian walked up.

​The Holy Spirit at work.

The rest as they say is history. I am HOME!